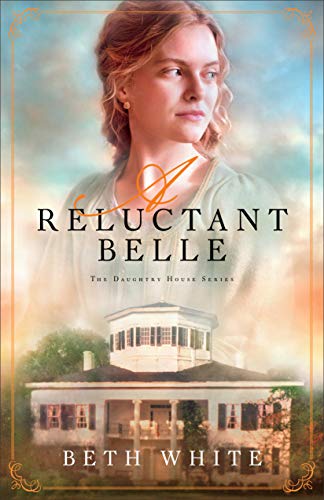 “What do you want from me? We can’t be confidants any ore. We can’t even be—argument mates anymore,” Joelle is told in Beth White’s novel, Reluctant Belle.

~ What ~
The second in the Daughtry House series, this three-hundred-and-sixty-eight-page paperback targets those interested in a historical romance set in the South during the middle of the Reconstruction Era. With no profanity, topics of abuse, torture, and murder may not be appropriate for immature readers. The ending includes a note to the reader, an excerpt of another novel, acknowledgments, and the author’s biography with advertisements.

In this tale set in 1870 in Mississippi, twenty-two-year-old Joelle Daughtry has her hands full being betrothed to the local pastor while she helps run a resort hotel and writes under a male pseudonym newspaper articles that promote helping former slaves. However, knowing she rushed into accepting her marriage proposal due to the ongoing frustration with Schuyler Beaumont, a hotel investor she has known since childhood, their love/hate relationship has to be put on the back burner to uncover who murdered his father.

~ Why ~
I enjoy novels where I learn about America’s history, especially when slavery was abolished. I appreciated the details of the Southern culture. The story focuses on how freedom started spread among slaves and lines were drawn between the Lincolnites, Union League, and Ku Klux Klan. The bantering between the two protagonists was charming and engaging at times.

~ Why Not ~
Those who do not like stories of the persecution of freed slaves may pass on this book. Others may wish some of the characters were not stereotypical and the romance predictable. I found Joelle to be a bit too flawless as a teacher, journalist, and hotel manager who seemed wishy-washy when it came to love.

~ Wish ~
Since this is a part of a series and I did not read the first book, I wish there were a list of characters since there is a plethora of people mentioned. I prefer all pronouns of God capitalized for reverence.

~ Want ~
If you like a historical novel of the South’s conflict over race and politics, this is a quick and cozy read of romance that includes solving a murder.

Thanks to Revell for this complimentary book that I am under no obligation to review.

This book can be purchased at https://amzn.to/2KfLy6D