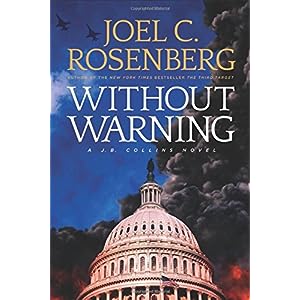 “I was doing everything I could to bring Abu Khalif to justice, to safeguard my family, to give us a chance at a life of freedom and security. But I was failing. I’d almost died — again,” J.B. Collins realizes in Joel C. Rosenberg’s novel, Without Warning.

~ What ~
At four-hundred-and-eighty pages, this hardbound targets those that enjoy Christian contemporary fictional suspense involving hunting down the leader of ISIS. Using words such as hell and damning, its topics of terrorism, chemical weapons, and murder may not be appropriate for immature readers. The beginning includes a list of characters and preface while the ending has acknowledgments, the author’s biography, and advertisements for other authored books.

The final book in the J.B. Collins trilogy series, the protagonist finds himself at the U.S. Capitol for the State of the Union to be recognized for previously rescuing the president. When a series of bombs hit the building, J.B. makes it his quest to find and kill Abu Khalif, the ISIS emir. After several well-orchestrated attacks on America involving sarin gas, the New York cynical war correspondent becomes a target and joins the Israelis to out-smart the evil leader of the Islamic State. Only when J.B. is dealt a personal blow and gives his life to Christ does he understand sacrificing for freedom.

~ Why ~
Those who like action-packed current day war stories of terrorism in the Middle East involving several countries will appreciate this book. I enjoyed the short chapters written in first person that were to the point, showing Collins’s frustration and fear. The pace of the book shoots bullets of dire warnings, death threats, and chemical attacks while J.B. and the team ardently reflect their line of fire. The eternal plan of salvation is stated succinctly and with purpose.

~Why Not ~
Those who do not like graphic violence, chemical weapons, and death will avoid this series that explains how deeply ISIS and their leaders want control of the world for the coming caliphate. Some may not like the limited first person view, but I feel it accentuates the emotional and personal aspect of dealing with good versus evil.

~ Who ~
The best-selling author of a dozen fiction and five non-fiction books, Rosenberg has sold more than three million copies. Founder and chairman of the Joshua Fund, he and his family live in Israel.

~ Wish ~
Not expecting an abrupt ending in this read, I wish creative writing allowed a fourth in the series. I prefer all pronouns of God were capitalized for reverence.

~ Want ~
If you enjoy geopolitical “go get ‘em no matter what” stories of global terrorism in Christian fiction, this series will keep you rushing through the chapters to find out what happens to J.B.

Thanks to Tyndale House Publishers and the author for this book that I am freely reviewing.

Filed under ***** Great - A Keeper, If You Borrow It, Give It Back!, Book Review, Christian, Fiction

2 responses to “Without Warning”