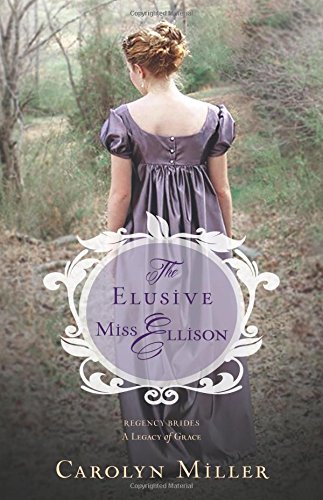 “It appears Miss Ellison is determined to remain elusive as ever,” Nicholas states in Carolyn Miller’s novel, The Elusive Miss Ellison.

~ What ~
Book one in the Regency Brides: A Legacy of Grace series, this three-hundred-and-four-page paperback targets those interested in a Christian romance involving a love/hate relationship between two individuals from different backgrounds and status. The book includes acknowledgments at the end.

Set in 1813 in Gloucestershire, England, twenty-three-year-old Lavinia Ellison’s focus in life being a minister’s daughter has been to help the poor. Preferring those who have good character and actions that prove it, she is not charmed when she meets Nicholas, the Earl of Hawkesbury. As he vies for her attention through teasing and toying with her affections, she becomes more boldly outspoken regarding her opinions and unwavering conscience toward the smug and annoying man. It is only when each learns how to forgive themselves and others of the past and release pride and pain, can they understand what they have in common.

~ Why ~
If you enjoy romantic tales from the eighteen-hundreds in England where propriety, manners, societal norms, and appearances are of utmost importance, this short story covers the gambit of life in England between a woman who does not realize she is in love and a man who refuses to accept it. I like the details of the country life and living in a small town and appreciate the author including the eternal plan of salvation.

~ Why Not ~
Those who do not have or want a personable relationship with Jesus Christ may avoid this book. Some may not like a predictable read of two main characters who waffle back and forth in their romantic intentions, often showing indecisiveness.

~ Who ~
A fan of Jane Austen, Miller lives in Australia and is married with four children.

~ Wish ~
I wish Lavina’s background, upbringing, and heritage were not so predictable. Sometimes I had trouble understanding who was speaking.

~ Want ~
If you are looking for a series of romances in England two hundred years ago, this first book in the series of a love/hate relationship involving social status may peak your interest in what lies ahead in this Regency Brides series.

Thanks to the Book Club Network, Kregel Publications, and the author for this book that I am reviewing freely.

This review will be posted on the Book Club Network, DeeperShopping, and Amazon with links on Bookfun.org, LinkedIn, Godinterest, Pinterest, Google+, and Twitter.