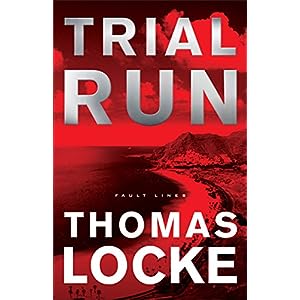 “You will remain in complete control and in total safety at all times. If there is any sign of discomfort or distress or risk, you will return immediately and end the ascent. I will begin the count now, from five to one,” Gabriella instructs Charlie as he transitions into another time frame in Thomas Locke’s novel, Trial Run.

First in the Fault Line series, this three hundred and eighty-four page paperback targets those who enjoy thriller-suspense fiction involving mind control. With no profanity or extreme violence, topics of threatening plots and potential death may not be appropriate for immature readers. The book concludes with an excerpt from the next book in the series, the author’s biography, and advertisements.

In this current-day story set mainly in Santa Barbara, California, Shane Schearer’s life is uprooted from working on her MBA to being a wealthy partner in a business adventure. When she meets fellow UCSB theoretical physics student, Trent Major, she helps market his dream-induced algorithm project that allows one to access separation of body and consciousness.

However, Trent’s venture has already been implemented in its early stages by a team in Switzerland that can travel between time, using a process that is a cross between telepathy and teleportation. When another subversive group who stole the same quantum computing system uses it for sinister outcomes, not only Trent and Shane must find out and destroy those wanting control.

With the scientist’s eidetic memory being the core ingredient, Shane and a plethora of characters have to ascend or transport into a realm that shows the future. After multiple testers become comatose, those involved begin to realize the system’s ultimate power.

As each player travels on their psychological journey to uncover true motives and emotional feelings, the story’s peak ending is predictable. Leaving several unanswered questions for what comes next for Trent and Shane, readers will wonder what out-of-body experiences are in the sequel.

Using the pen name of Thomas Locke, Davis Bunn has sold over seven million copies of his award-winning novels that have been published in twenty languages. Having won four Christy awards in fiction, he divides his time between Oxford and Florida.

Thanks to Baker Publishing for furnishing this complimentary book in exchange for a review based on the reader’s honest opinion.

Filed under **** Good - Will Be Glad to Pass On to Others, Fiction