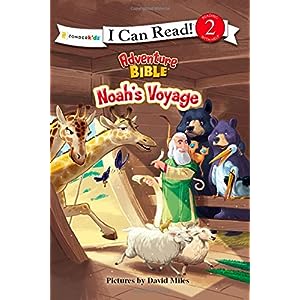 “There is going to be a flood. Build an ark. Then two of every creature, one male and one female, will come. Put them on the ark. Then wait,” God instructs Noah in the retold Bible story of Zonderkidz’s children’s book, Noah’s Voyage.

Part of the “I Can Read!” Adventure Bible series, this numbered thirty-two-page paperback targets children four to eight years old interested in knowing more about the Biblical story of Noah and the ark. Using the New International Version of the Bible, the story is taken from the Old Testament. Containing the concepts of obeying and trusting God, its level is for developing readers.

After a book-ownership page and message to parents regarding the “I Can Read!” series, illustrator Miles’s expressive and detailed designs fill both sides of the opened pages, leaving blank backgrounds for black wording in an easy-to-read font. The end of the book includes sections titled “People of the Bible” and “Did You Know.” There is also an advertisement for three other books in the Adventure Bible Family series.

Following well-known Biblical events, this charming and engaging rendition is of God telling Noah He loves him and asks the six-hundred-year-old man to build an ark since the people did not follow God’s rules.

Noah and his three sons work hard and build the massive boat. God brings the animals in pairs to the ark, and they are assembled on the top, middle, and bottom floors of the huge ship. After God closes the window, the floodwaters appear, and it rains for forty days and forty nights, covering all the land.

Noah, his family, and the animals are safe. After one hundred and fifty days, the water began to recede. Noah sent several birds free to fly, making sure the land had reappeared. In the end, Noah built an altar to God and thanked Him for keeping them safe. God put a rainbow in the sky, promising never to flood the earth again.

Although the book does not go into detail of the tragic story not in the ark dying in the rising waters, it is Biblically sound. The story offers children a glimpse at how powerful and loving the Creator of the universe was to save Noah and his family.

Thanks to Book Look Bloggers for furnishing this complimentary book in exchange for a review based on the reader’s honest opinions.

This review will be posted on Book Look Bloggers, DeeperShopping, and Amazon with links on Bookfun.org, Godinterest, Pinterest, and LinkedIn.

Filed under ***** Great - A Keeper, If You Borrow It, Give It Back!, Childrens, Christian