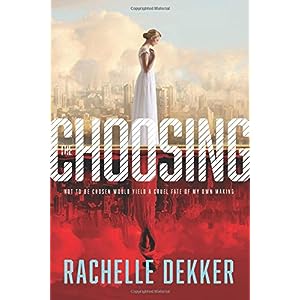 “Lying on the bed were three grey uniforms that were painful to touch – painful because of the reality they drove home: that she was stuck in a life that would never hold the future she had been promised, that she really was as worthless as she’d always feared,” Carrington acknowledges in Rachelle Dekker’s debut novel, The Choosing.

First in the A Seer Novel series, this four hundred and forty-eight page paperback targets those who enjoy dystopian stories of truth versus lies with a blend of mystery and romance. With no profanity, topics of physical abuse, torture, and execution may not be appropriate for immature readers. This reviewer wishes all pronouns of God were capitalized for reverence.

The year is 2257, and the Authority has determined everyone’s worth, position in life, and if they are chosen to be married. When the day approaches for Carrington Hale to attend her Choosing Ceremony, she is devastated she is not selected to become a bride. Marked as worthless and unwanted, she is banned to being a Lint, the lowest-level in society of menial tasks proving she is nothing.

Doomed and discouraged, she befriends another Lint named Larkin who tries to convince her the errors of the Authority and to follow a man named Aaron who shows the way to freedom.

Given a second chance, Carrington begins to question the Authority’s core beliefs of labels and identities, especially when she notices a CityWatch guard that wants to protect her. Trying to find her true self that includes God’s view of her place and purpose, her choices become limited when she is told someone else possesses her.

With an undercurrent theme showing God’s abundant love of feeling wanted, beautiful, worthy, and perfect in His eyes, the book lacks the eternal plan of salvation as it uncovers how a cult twists Scripture, errors in doctrine, and becomes self-righteous.

A quick read that promotes looking inward to find peace through the Almighty, the book quickly engages the reader to consider how sin and shame try to supersede God’s love as Carrington chooses her future both physically and spiritually.

Following in the footsteps of her father’s fiction-writing vocation, author Dekker continues the absorbing storytelling family traits of suspense. With prior experience working in marketing and corporate recruiting, she lives in Tennessee with her husband and cat.

Thanks to Tyndale House Publishers, Inc. for furnishing this complimentary book in exchange for a review based on the reader’s honest opinions.

Filed under **** Good - Will Be Glad to Pass On to Others, Christian, Fiction

2 responses to “The Choosing”