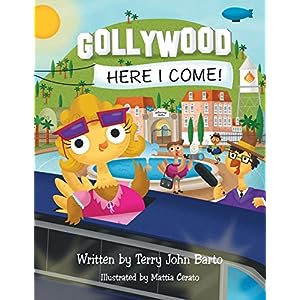 “Six months later, the film debuted and Anamazie became a huge star. Devoted fan clubs formed across the country. Everyone said she was another Shirley Purdy,” Terry John Barto writes in his children’s book, Gollywood, Here I Come.

This thirty-two-page oversized paperback targets children ages four to eight years old. With no scary or awkward scenes, the book is about a turkey that rises to stardom after failing and trying again. The one-third to full-page, full-color illustrations by Cerato are colorful and captivating, following the storyline with interesting details.

In this story that promotes persistence and dedication, a young female turkey named Anamazie loves to be the best at what she does. Being the youngest majorette in a parade or trying to become the winner of “Gobbleville’s Got Talent,” she is determined to win.

When she does not come in first place in the acting contest, she smiles but leaves the stage in tears. As her mother tries to comfort her, a talent scout appears and offers the young bird to try out for a part in a Gollywood movie.

With her “stage mom” hovering over her constantly, Anamazie arrives on the sound stage, meets the director, and is hired. For the next week, she practices hard by learning new songs and dance routines. Her parents and brother help her learn her lines.

As her mother encourages her time and time again, the girl enters the movie set but oversteps her bounds by upsetting other actors. After the film is produced, Anamazie becomes a well-known star.

Although she has a private teacher, she returns to her old school and visits with her classmates. They ask questions about what it is like to be a movie star. She reiterates her mother’s mantra of “you can do anything if you work hard and never give up.” The end of the story has the turkey driving off to Gollywood in her limousine.

Although the story portrays the mother as controlling and the rise to stardom somewhat idyllic, the theme throughout the book promotes that hard work and perseverance can help one obtain his or her goals in life.

Director and choreographer of more than two hundred theater productions, Barto is also an author and creative director living in Southern California with his two dogs. No information is available on the illustrator, Cerato.

Thanks to The Book Club Network for furnishing this complimentary book in exchange for a review based on the reviewer’s honest opinion.

Filed under **** Good - Will Be Glad to Pass On to Others, Childrens, Fiction