If You Were Me and Lived in … China 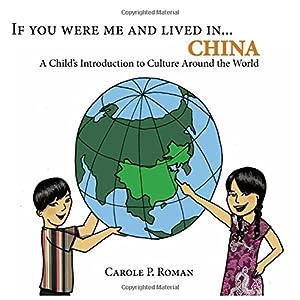 Part of the worldwide series, this thirty-page paperback targets preschool to early elementary school-aged children and readers who like learning about other countries. With no profanity, scary scenes, or violence, it would best be read to beginner readers based on some complicated words that usually include pronunciation. Colorful illustrations cover one side of the page with a nicely sized font wording on the opposite side and one double-paged photograph. Three pages at the end of the book reiterate how to pronounce certain words and their meanings.

China is an interesting place because it has so many people and a variety of climates along with two famous rivers. Its name comes from the Qin dynasty that many mispronounced in the past.

A unique place to visit is Beijing, its capital, along with the Forbidden City and the Great Wall of China. Many like to see the giant terracotta clay army that was buried approximately two thousand years ago.

There are many activities in the country such as going to the New Year or Spring Festival. The celebration of the new year lasts fifteen days, and it is a day to honor grandparents and promote good luck.

With so many citizens in the country, there are many different types of foods. A favorite Mandarin dish from Beijing is Peking Duck; Cantonese dinners include stir fried rice with sweet and sour pork. Many people like the spicy chili peppers in Szechuan meals while Shanghai food often involves seafood. Most everyone loves fried ice cream for dessert.

The reader learns names for father and mother. Also taught are common names for boys and girls, as well as words for doll, money, and school.

Not written as a fictional story, this educational book is a simple way for a young child to learn about a foreign land, especially if he or she knows someone living there or is planning a trip to visit.

With so many countries around the world, one looks forward to future books in the series to learn more about a particular location.

An award-winning author, Roman has written complete series for children of books based on counties and pirate genre. She lives in New York with her husband and close to her children and grandchildren.

Thanks to Red Feather Publishing for furnishing this complimentary book in exchange for a review based on the reader’s honest opinion.

2 responses to “If You Were Me and Lived in … China”